Lesson 9 from: How to Sew Your First Skirt and Understand Patterns 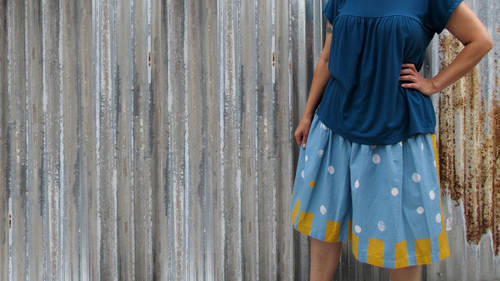 Lesson 9 from: How to Sew Your First Skirt and Understand Patterns

Sewing the Side Seams

So now we're ready to so our skirt to our yoke right along the road that we've created by these gathering threads, so I'm going to start out lying up on my seem allowance for this pattern because this step step number five doesn't tell us where to line the edge of our fabrica that actually means that you want to default to the seam allowance for this pattern. So in your instructions and also on the pattern pieces, sometimes on the back of the envelope, it tells you what the seam allowance for this particular project is in this case, the seam allowance is five eighths of an inch or one point five centimeters, so the first thing I'm going to do is take my tape and put that right on my one point five centimeters line and to sew a permanent stitch, I'm going to change my stitch length from my longest stitch that was used for the gathering stitch back down to around two point five for my permanent stitch this time, I'm also going to do a back stitch at the beginning and at the end, because ...

The course was as clean and precise as her sewing. I haven't sewn for some time, but the techniques Shaerie taught will serve me well. Thanks~

Shaerie is an exceptionally clear and focused teacher. She points out essential steps for beginner sewers and doesn't get caught up with extraneous details.

Wondering if there's any way to still get this pattern. Thanks!