Lesson 10 from: The Vintage Pocket Skirt 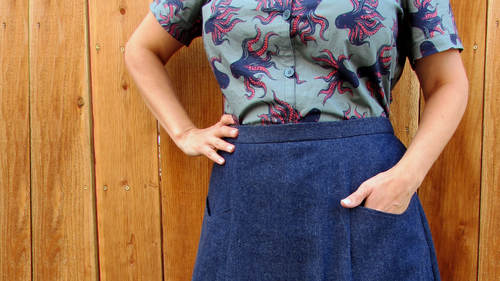 Lesson 10 from: The Vintage Pocket Skirt

Attach the Waistband to the Skirt

So now that we've sonar skirt together, we can start to work on our waistband. We're going to create the top fold of the waistband by pressing with our iron. I'm going to start out with my front waistband here if I open it up so that the interfacing is facing up at me like this. What I want to do is folded in half of the long way. I want these long edges to match up and I'm going to hold it in place. Well, I grabbed my iron and smooth out this top edge to make it as even as I can, this top fold is going to end up being the top of the front of your waistband. So it's a good idea to get it as even is you can a nice crease, same thing for the bottom. This is going to open up like this remember the back of the waistband is longer than the front of the waist band, so if they don't match that's cool press that fold out and then the same thing, I'm going to fold this long edge up to match this one it's going to feel a little different because this one doesn't have any interfacing in it, you'l...