Skip to main content
music & audio
All Audio Classes > Podcasting > Behind The Podcast : Davia Nelson On Cooking By Ear > Production: Cooking By Ear

Lesson 2 from: Behind the Podcast : Davia Nelson on Cooking By Ear 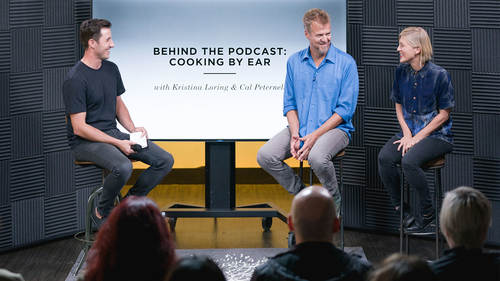 Lesson 2 from: Behind the Podcast : Davia Nelson on Cooking By Ear

Well let's watch the clip. Okay. Alright. Before we enter her house I have my recorder on because I want to capture like everything even if we don't use it. So, a major goal is to sort of just get right in the environment and not have any sort of like fumbling with my mic or like trying to get my headphones on or looking hectic. So trying to make it as, not, kind of like casual but like, I want to be as present as possible, in the moment but also establish like we're doing and interview. We're not just hanging out. So I have my headphones on and my mic rolling and I think that like the initial goal is just to like get inside someones home and have them put them in action so it doesn't go into this, like we're not just makin' small talk. Like I want you to show me around your house. I want to show, you want, like with Davia specifically we didn't know what her house was gonna be like at all. We'd never been to her home but her kitchen is like, the minute we walked it's like bright...