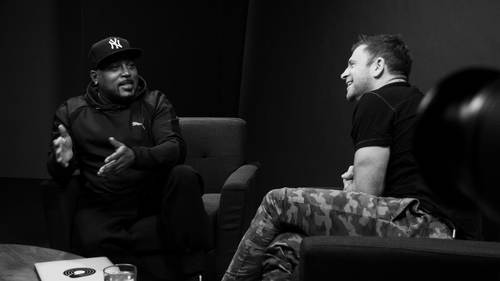 Why Grit, Persistence, and Hard Work Matters with Daymond John

There's a common misconception that artists have a monopoly on creativity… But the very act of making waves - no matter the career - is a creative one. The Chase Jarvis LIVE Show is an exploration of creativity, self-discovery, entrepreneurship, hard-earned lessons, and so much more. Chase sits down with the world's top creators, entrepreneurs, and thought leaders and unpacks actionable, valuable insights to help you live your dreams in career, hobby, and life.

This is Daymond’s second time bringing his buttery soft hands and understated wisdom on the show and somehow we had even more fun than last time. Between jokes and anecdotes, Daymond drops some serious wisdom on how to keep your goals, habits, and pursuit of your dream life simple and effective.

Daymond John is the CEO and founder of the iconic lifestyle brand, FUBU, which he started by selling handmade hats on the street and went on to have more than $6 billion in sales. You’ve seen him as the “snake in the grass” star on ABC’s Shark Tank, which is currently in its tenth season of filming. He released his first NY Times best selling book, Power of Broke, in 2016, and is just about to drop his second, Rise and Grind.

Daymond John is the CEO and founder of FUBU, the iconic global lifestyle brand that went on to have more than $6 billion in sales. A New York Times Bestselling author, Daymond is one of the original cast members of two-time Emmy Award winning series, Shark Tank, which airs Friday nights on ABC. In 2015, Daymond was named a Presidential Ambassador for Global Entrepreneurship and has joined the President and his staff at summits in Kenya and Cuba.
SEE INSTRUCTOR'S CLASSES