Lesson 1 from: The Happiness Equation 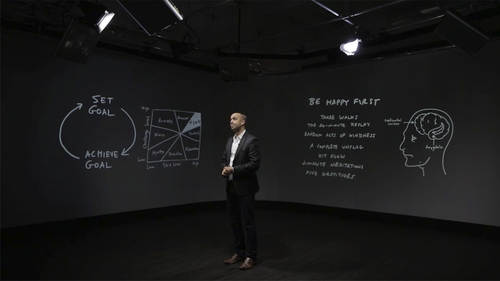 Lesson 1 from: The Happiness Equation

So here we are. You made it your in the 20 minute video. Who were We've been so far. Well, first we talked about how a model for happiness is totally backwards. We said it doesn't go great work leading to big success leading to happiness. In fact, it's the opposite. You have to be happy first, and then you do great work and then it leads to big success. We know that being happy first, actually, least a 31% more productivity, 37% higher sales and three times more creativity. That's why you do the great work in the first place. So we talked about that, and then we talked about how you actually do that. How do you actually be happy? First, we talked about the 20 for 20 challenge committing toe, one of three happiness exercise that you can do for just 20 minutes a day for just 20 days in a row. Uptick. Your happiness. So now what are we going to talk about? Well, there's three gigantic issues I want to share with you in the world today. Number one is we all have fears in our life. There's ...

Neil Pasricha is the New York Times-bestselling author of The Happiness Equation as well as The Book of Awesome series, which has been published in ten countries, spent over five years on bestseller lists, and sold over a million copies. Pasricha is a Harvard MBA, one of the most popular TED speakers of all time, and today serves as Director of The Institute for Global Happiness. He has dedicated the past fifteen years of his life to developing leaders, creating global programs inside the world’s largest companies and speaking to hundreds of thousands of people around the globe. He lives in Toronto with his wife and son.
SEE INSTRUCTOR'S CLASSES

It was short but entertaining. The end seemed like a plug of his book but overall it gave some great insight into how to live a happy life.

Well, now that it is free, it's a pretty good talk

Wired for Story: How to Become a Story Genius