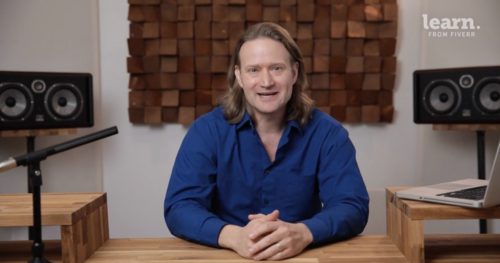 Welcome to the world of Voice Over

What Is Voice Over?

Where is all the money?

Quiz: What Is Voice Over

The Voice Over Performance

A Conversation With One Person

Breaking Down the Delivery Components

The Magic of Lists

Placing Audio into a Video

Your Demo is your Business Card

Gig Photo and the Fiverr Forum

before we jump into actually doing voiceover, it helps to know a little bit about the industry because this will show you where and how you fit into the world of voiceover. Maybe you've been told, wow, you have a great voice, you should be in voiceover. And while this might be a nice aspect to your voice over business, having a good voice really has nothing to do with voiceover, voiceover is all about storytelling. So why do people focus on the voice? Well, let's do some myth busting about the voiceover industry myth. You need to have a great voice to be in voiceover. Historically, Men with deep voices ruled the voice over world, why there are two reasons for this. Number one technology Mike's 30 and 40 years ago were not as sensitive as Mike's today. So it took a powerful voice to capture this message on the tape and replay it over tv and radio. Today Mike's have completely changed And this has opened up the voiceover industry to all kinds of voices. In fact, often the powerful barito...

ne voice is not what people are looking for. And the second reason is marketing historically, people were told what to say, right, this is the greatest thing ever. And commanding voice would instruct you on the latest gadget you had to have. But today companies just want their products shared, tell it, don't sell it. They want regular people to share their products because regular people are, who are going to buy their products myth. It's so competitive. You'll never get any work and all the good work is already taken. This is a very competitive industry and you do have to work hard to master the skills to be competitive. But there was also more work out there than there are good talent and that work keeps growing and I'll touch on that in the next video. There is never a bad time to get into the voiceover industry myth, agents hold the keys to the kingdom. This used to be true. 30 years ago, you had to live in L. A Chicago or new york and have a powerful agent or you could forget the voiceover industry, but the internet in the digital age have changed everything Now. If you have a mic, a computer and an internet connection, you can deliver voiceover from anywhere in the world to anywhere in the world myth. The startup costs are too high. The technology can be overwhelming, but you don't have to have a soundproof room to record in. Alright, so don't worry, technology is getting smaller, less expensive and easier to use each year and there are some very affordable options for getting started making good sound and growing your client base. I'll go into much more detail in the studio section of this program. I hope busting these myths. Not only gets you excited about the possibilities of voiceover, but helps you to see that your voice and more importantly, your life experience are very valuable assets in the next video. We're going to discuss what exactly is voice over