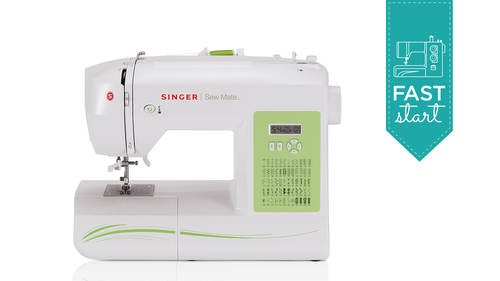 When you turn the machine on, it automatically goes to straight stitch, so too, so are straight stitch. I've got a couple of fabrics here, and I'm going to just put the fabric underneath like so and lower the presser, foot lifter that's very important to lower the presser foot lifter when you start to so I've seen beginners, and if you are a beginner, I just want to call this out to your attention. I've seen now where people just put the fabric under here like this, they don't lower this down don't know that they're supposed to, so I'm telling, you know, and they start, they step on the foot controller and start sewing and nothing's happening and it's just making a mess. It can't draw the fabric through, so you have to put the presser foot lifter down. What happens there? They're these little things that look like teeth underneath your foot, the's air called feed dogs and what happens is when you put your fabric under here and then you lower your presser foot onto the fabric, the press...