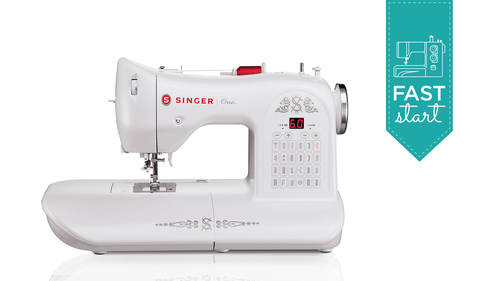 2. Threading a Bobbin and Sewing a Stitch

As I said, you get a few bobbins with your machine there's one in it and three that were in tray, but sometimes you feel those up with some colors and you want to get some more bobbins for other colors of thread that you're going to use and I want to show you what to look for when you go to the store because bobbins are not all alike, and I know some folks don't even realize that there is a big difference between them just depending on machine siri's. So here are your machine uses what we call a class fifteen j bobbin so right here, if you look all these say singer at the top and bobbins air pretty much available anywhere where sewing notions are sold, but they all say singer at the top and they all say bobbins, but there's a number here there's fifteen fifteen j sixty six if you look a little more closely at thes and what you want to make sure you do is always used the exact same bob in style that comes with your machine. Oh, you don't substitute and go well, I like metal bobbins bett...