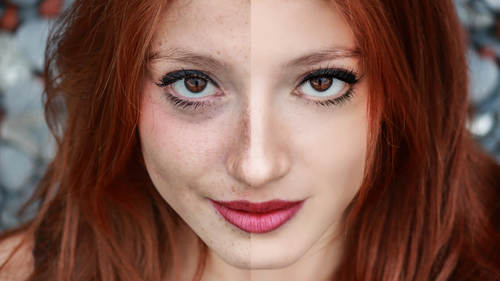 Getting Started on the Image

Add Details to The Face

Brighten Whites of the Eyes

Alright, libraries. Using other parts. Start collecting, ladies and gentlemen. (laughter) Find out. I have hair parts. I have eye lash parts. I'm a creep. I have, like, these bottles of eyes. No, I don't. (laughter) I might be a creep but I don't have bottles of eyes. (laughter) I, seriously, I have, like, a bag lips. I have lips. I have lips I carry around. I'm gonna admit to something. On a lot of my files, on the highlight, we're gonna talk about that a little more, I use Heidi Klum's, the bridge of her nose. The highlight only. Perfectly legal and I put it on people's faces. Heidi Klum's nose. It's fantastic. Alright. (laughter) Cheers, Heidi. Alright, text fight. I don't know. Do you like one? Is one of them? Let's put, how 'bout this one? For giggles. Let's just say, we like that one. I'm gonna open up that file and drag it to Photo Shop and open it. I don't care about any of this. And I'm gonna, oh, it's got an eyelash in it. I'm gonna not worry about that right now, the fact th...

at it's got an eyelash and I'm gonna go ahead and drag this on top of my eye. I'm gonna put it at 50 percent opacity. Now, we're using this for an catch light. I often use this for iris detail. You ever have that where you shoot someone and their iris looks dead? There's nothing to it. Steal someone else's. I mean, borrow someone else's. (laughter) Alright. And I mean, I have a lot of eyeballs. That little scene was just me bringing a few so I didn't look too creepy. I have quite a few. And here ya go. You can line it up wherever you like. Now, you can do this a few ways. You can actually use what's already there. You should probably name it, unless you stole it, then don't name it. I'm going to put a black mask on it and I'm just gonna paint a little, little knobby in here. You can do this a few different ways. It depends on what kind of flexibility you want. Now, I only want the white to show, so, I could put this on screen, add a levels move to it, link it, and say, hey, Photo Shop, can you make this whole thing black, except for the white of that eye? And so, the rest of it will disappear and the only thing you'll get is this screen. You could do that. It's a little clumsy and I'm gonna admit to something, 'cause I think that's what we do here. It's almost like therapy. I don't like people to see all my tricks, 'cause then they're not gonna hire me, right? So, I don't just see everything. So, what I would probably do in this case, is I would pull a channel. So, I'm gonna go, I'm old school. I like the old school technology. I'm gonna look at the channel that's got the most contrast just right here. Now, this is a little dot, so this is kinda easy, but you can have a catch light that's pretty complicated. It's faded. It's got reflections in it. This works for that, as well, and what I'll do is, I'll just pull a channel. Let's say, the green channel and at this point, ladies and gentlemen, take your hands off the computer and say, what am I trying to do? What I'm trying to do is I want that catch light and I want nothing else. So, I need to isolate that. I'm just gonna draw with the lasso tool and inverse, command shift I, inverse that selection. Everything but that little circle is selected. I'm gonna fill that with black. I'm starting to make a selection, now. I maybe will take the dodge tool, burn and dodge, make absolutely certain it is set to shadows, and I'm just gonna paint, dodge that out. I'm gonna go ahead and leave a little of the fringe around it, because I think it might, there's a little dot, it might look interesting. I will then command click on the icon for that channel and I will go back to the highlight layer. I will turn off that file, the original file that made the highlight. I will make a new layer, called eye highlights and I will fill with white. And now, it's perfectly floating. They have no idea where it came from. There's no copyright issues. There's no nothing. I just have a eye highlight. I hope that answered the question. If that mask was not perfect, then you can go in and tighten it up a little bit. Change the color. Change the reflection. Photographers in, photographers out. Again, this absolutely applies for the iris, as well, the exact same thing. You can take the texture from the iris, with a channel pull. I'm gonna do that real quick. There's so much to cover. You could take the texture from this guy's eye. Ah, you wanna see somethin' really clever? Forget the channel pull. Take the texture from this guy's eye. It's a levels move on his file. Do a high pass on that. Put it on linear light. Put his in. If you have an eye that's got no texture to it, you could put someone else's texture in it, if that's what want. I know I have texture in my eyes, so you can't see it. If you have an eye with zero texture in it, just put someone else's eye. Do the high pass on it and paint it in. I have texture so you can't see it, but if you didn't, this would show up beautifully.

If you were like me and had no idea on where to start and feared that the editing process would be too destructive and would have to start all over again if the client didn't like your completed work - then this is the class for you. I watch this class often for review and to make sure that I maintain these good habits Lisa suggests to do. If you follow all of her helpful commentary on her how's and why's you will end up in a far better place when that time comes that you have to re-edit your edit. I cannot say enough great things about her work flow and how it not only enhanced my images to the result I was looking for but also decreased my editing time(bonus!!!!). I also on a whim sent her a email through her personal site and she replied with a massive helpful technique for enhancing freckles on a job I was working on. She is amazing! She is a true teacher who is there to show you how to use photoshop for you to find and gain your own editing style. Far too often i find myself in retouching classes that only demonstrate how to make your images look like who is teaching the class... Workflow and Style are very different, you can have the same workflow but your style is determined by your taste. Her workflow is solid and delivers time and time again. This class should be in everyone's dashboard hands down.

Thank you for taking the time to answer my question and take us through your "delivery" process, I found that extremely helpful. I have purchased two of Lisa's classes immediately after the live stream during Photoshop Week 2017 and was very excited to stream another set of lectures from Seattle. I will be purchasing the last two courses of Lisa's within the next 24 hours as I did just over a month ago. I find her classes to be absolutely brimming over with useful information--everything from the technique, her process, what other professionals in her work are doing, and **why** she chooses the methods she does in retouching. She is relatable and genuine, and her knowledge of the program and how to maximize efficiency while "skipping the actions" really reinforces the educational part of her courses. There are "easy way outs", but she emphasizes that you should understand the ways in which any adjustment effect the entire photo. These courses have helped me to move forward in my education, helping me to realize that with enough practice and good habit formation--such as naming every single layer every time-- that it is not irrational for me to make an effort in building a portfolio and a Master's degree with little-to-no- previous experience with the software. I am very appreciate. I hope to see more from Lisa in the future, but I have plenty to practice with for now! Thanks again, Kristine Pye kristinepye@gmail.com

Lisa Carney is amazing! She has a depth of knowledge of Photoshop, retouching techniques, and compositing that she shares in a fast, but straightforward, easy to follow, step by step manner. No matter what your level of expertise, you'll find gems, shortcuts, and methods in her teaching that you can practice and put to use to make your work stronger, faster, and cleaner. And with the bonus materials she graciously provides, including workbooks with her detailed steps, practice files of the images she uses in class, and before and after comparisons, you'll be on your way to improving your skills immediately. She's an accomplished retoucher and gifted teacher. If you have the opportunity to take one of her classes, take advantage of it!

From Capture to Print