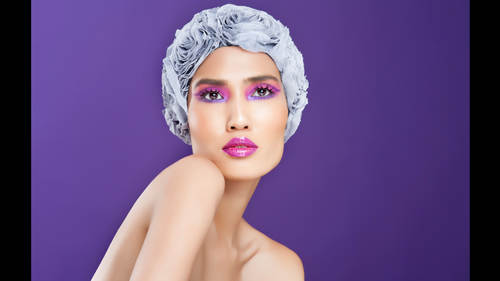 Nobody taught me photo shop, and that is not like patting myself on the back like, ok, look at me, I'm so great, I taught myself something like that. I made a whole bunch of mistakes before I actually figured out what's, right? What kind of plug ins are best store? What kind of techniques make ur retouching not look super fake and all those types of things? So what I'm going to teach today is less what you would get in a college course as faras, abc and instead, okay, I've been doing this a while, I've made a lot of mistakes, this is what saves time, and this is what works for me, and so granted, there are endless resource is online, and then throughout this entire week, I promise you'll see people teaching in other ways. But this is what actually is in my work, so I'm a portrait fashion photographer, and so the retouching ideo the range is drastically, so sometimes I'm photographing, for example, professional athletes, sometimes professional athletes, for example, I'm doing portrait o...

Fashion photographer Lindsay Adler has risen to the top of her industry as both a photographer, educator, and Canon Explorer of Light. Based in New York City, her fashion editorials have appeared in numerous fashion and photography publications including Marie Claire, Elle, InStyle, Noise, Essence, Zink Magazine, Rangefinder, Professional Photographer and dozens more. As a photographic educator, she is one of the most sought after speakers internationally, teaching on the industry's largest platforms and most prestigious events.
SEE INSTRUCTOR'S CLASSES

Fabulous introduction to editing skin. learning how to use modes for clone and heal tools is an absolute game changer! Also incredibly helpful was the tips on using plugins, I have Portraitpro and its so easy to go overboard. I thought I already knew the basics of these tools, but my control of these tools just went from about 2 to 12 out of 10!!! thanks Lindsay, I cant wait to get to the Advanced class and blend modes next - I bought the blends one because it was on special, but after watching this, I cant wait to get a better understanding of the blending modes. simply amazing. For wrinkles, pimples, blemishes, dark circles, start right here! cheers

Outstanding introduction to portrait retouching! It's concise and provides an excellent overview of relevant tools and when they might be useful. This 73 minute video has been much more helpful to me than any Lynda course I've taken. Lindsay Adler is a gem.

Lindsey is an expert in every aspect of photography and, in my opinion, can do no wrong. She's not the type teacher who is there to win a popularity contest and put on a semi-phony act; she's simply Lindsey, the real thing. I particularly love her editorial work; excellent taste in wardrobe, lighting makeup and set (if there is one). She's simply one of a kind and is as likable as she is knowledgable in all areas.