Lesson 4 from: Intro to Screen Printing 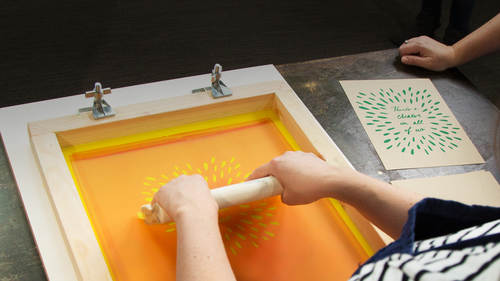 Lesson 4 from: Intro to Screen Printing

4. Create Design with a Transparency

Set up your darkroom

Coat the Screen with Emulsion

Wash out the Screen

We want to sort of dive into creating our imagery for silk screen printing. And this is something that we want to think about at the outset, just so that we kind of set ourselves up for success by choosing imagery that's going to be really easy to create as a silkscreen print. And part of what I mean by that is when you're a beginner, there's definitely some troubleshooting that's going to happen with the process, but we can choose imagery that's really bold and has a really nice juicy line rather than very small tiny detail, and that's going to help us have a better chance for successful printing because we're not going to have as much room for error, thank you, we're not going to have as much room for error in terms of getting that fine detail to show up on the first round. And essentially the reason that fine detail is difficult to capture is partially because of the way that the screen processing is, and partially the way that there are so many little different intricacies in the p...

Wow, that was a great course. Erin is clear, engaging and encouraging. I would loooove to see a follow up course with her that explores some of the more advanced silk screen printing techniques that she mentions in the last segment. Great job!

Erin is such an outstanding instructor. She's just so confident with her topic and with her ability to communicate. This class helped me realize that I'm not ready yet to start screen printing, which in my opinion is just as important as recognizing when you are ready to try something.

Recently got my Creative Pass and I decided to explore the Creativelive library out of my usual fields of interest. Saw the title of the course and I said to myself - what is this? I literally had no idea about Screen Printing and that was actually the main reason I took the class. In just two hours I went from not having a clue to understanding the process and imagining me doing it :)) I'm not sure it will ever happen but I really enjoyed the class. Loved the style of teaching, very calm and confident, as well as the moderator's and students' questions which were filling up the gaps.

The Magic of Watercolor