Lesson 5 from: Getting Started with Acrylic Paints 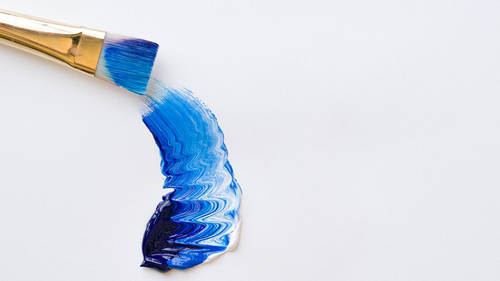 Lesson 5 from: Getting Started with Acrylic Paints

This is a series of tests with the palette knife and you can see the colors literally, like I can touch it and there's a surface there. This is a very different style of painting than what I've just shown you, but acrylics can do this. And this is a style of painting that you find in oils, people use palette knives to paint with oils, and again acrylics were designed to mimic how oils act. They don't exactly act the same, because of their drying time, so fast, they dry so quickly, but when you use a retardant, you can kinda slow that down. And we can take a look at that here on the surface, and we can even use a palette knife and there are a few different sizes. I'm gonna shift to the brushes in just a minute and I'm gonna test some brush surfaces. But the palette knife, let me just put them down here for you to see, I'll put them on the white. So the palette knife is basically the tool, instead of brushes, which is what you commonly think of when you're painting, when you're working i...

As an award-winning illustrator and author of children’s picture books, a Rhode Island School of Design graduate and professor in the Illustration Department at RISD…Mary Jane feels INCREDIBLY lucky; she gets to do all the things that she loves to do
SEE INSTRUCTOR'S CLASSES

Very thorough . perfect for someone who wants to start painting with Acrylics.

Nota review but a suggestion. Use a table knife to remove paper from bloc. No curling of edges.

Getting Started with Acrylic Paints