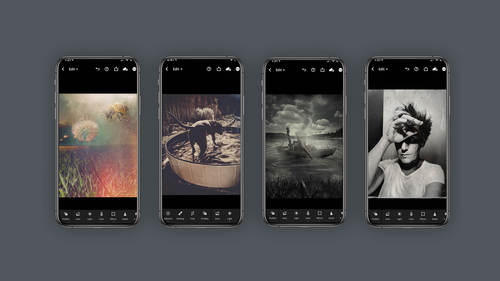 Visual Storytelling, Why It's Important.Finding Inspiration In Others Work

Cyanotype Sample with a Review of Lightroom Mobile Modules

let's take a moment and pare back and talk about capturing. So I know it's all the same iphone device. It's the same lens that you're shooting with. However, the capture applications you use make a huge difference. And if you're taking any of my other courses, especially the boot camp, I really dial down into capturing with the iphone app or light room mobile. But I just want to take a minute to talk about these different apps that are available. This is just a few of them by the way. These just happened to be the ones that I experiment with and I will tell you 90% of my shooting is done all through the adobe light room capture app and I'll just show you that briefly in just a second And then I often use the native apple app now as well because it's gotten quite good. I'm on an apple right now. But in addition to that highlight highlight is an amazing app. Really interesting. A lot of options you can use their. And then because I've got my new lighting system, I like to trigger my str...

obes with the pro photo. In fact you have to use their camera app. The pro photo camera to trigger strobes. So what this means for you all is as you're experimenting and trying your different images, you might want to try an experiment with different capture apps because the results you get are going to be different and then sometimes you're just going to flat out have to try another app. For example, if you buy some strobes and you want to use them, you have to use their app. So I'd like to invite you to be brave and not worry so much about switching. Be flexible. So let's get started. If you press and long hold on your app icon. Generally it'll launch the camera right immediately for you and light room has five different cameras available to you. The auto, you'll see the interface here down at the bottom. As I said, the boot camp has a lot more information on this on the workings of each camera and there's five cameras available on an iphone. Two are not available on a android and look at the interface. The interface on all of these are very, very different. So you can use them based on what you need. HDR is going to take three images. The depth capture by far is my favorite camera in the light room arsenal. So that's pretty fun. Then the next camera I put my cameras in a capture folder on my IPhone, we're gonna look at how light for just a second highlight is not free. I want to be really clear about this. You get a 10 day free trial photographers. Pro photographers love this app. I will tell you that in addition, I am just starting to use this. So I'm still waiting to form my opinion. There's lots of different functionality in there. They have depth mode in there, which I absolutely love. So yeah, there's a lot to talk about. A lot of these cameras have similar widgets on the inside that will allow you to dive deeper into the app to do more functionality and I invite you to check out the toolbars and to see on hallowed, you can even arrange it however you want. But most of the cameras have similar functionality if you dive under the hood as I like to explain. So definitely check out the highlight. As I said, you get a 10 day free trial which is pretty great. Um Yeah, that's what I want to say about that, definitely give this a try. It's definitely on my top three list right now which is saying something the next camera I think you should look at is the pro photo camera. I'm going to be 100% honest. I don't love this camera but what I do love is I can use it with strobes and fire my strobes and take some pretty cool evening shots. I think the camera app itself is going to get better. The company is working on that and these lights are amazing. This is one of those areas where I'm willing to stick and grow with a product as they are developing also because we're all learning, it's all new and frankly I want to be on the cutting edge of this technology and to do that. I need to participate So get out there and try a bunch of different apps, see what services your art, the best and above all. Don't just stick with those apps every now and again, come back and try either old ones or new ones all over again.

Good course. A lot of good tips and ticks. I thought there would be more on using different props to create different effects....A little disappointed that Mextures and PaintCan is only available on iPhone not on Android.....

This class really helped open my eyes to the potential of mobile photography. Now I know some new apps and ways of using my existing apps to take my mobile photography in a fun, new and more artistic direction.

Oh Lisa, what would we do without you? You are one of the main reasons I keep coming back to Creative Live. If anyone is relatively new to either mobile photography or Photoshop - push through the zones where you feel a bit lost. One of the absolute joys of Lisa's teaching is that she addresses all levels of students in one go - there is always something as an instant takeaway, and always more to sink in on future viewings.

iPhone Filmmaking: From Shoot Through Edit