Lesson 1 from: Buyers Round Table 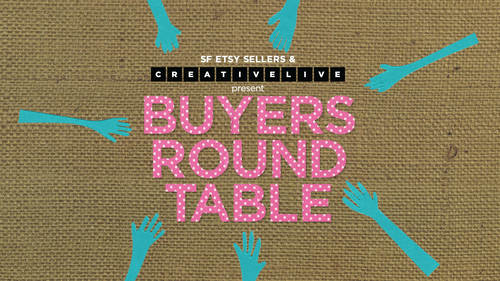 Lesson 1 from: Buyers Round Table

Find out how other makers got their handmade goods into stores and how you can do the same.
Show Transcript

Hello, everybody thank you so much for being here. Welcome teo, the buyers roundtable in event that creative live is throwing with the s f c sellers team were super excited to be here tonight we have for real life store owners and buyers who you're going to be hearing from where you can learn how to get your products into stores, so we're going to get started at home audience feel free to ask questions at the on the course page we have someone here, we're going to come to questions towards the end of the segment of the class, so we will get to as many questions as we can, and we're going to get started. So thank you guys so much for being here if we could just go around and if you could tell us your name, your store name and where people can find you online and of course, just a little bit about your shop, meaning his brianna burgers. I own urban bazaar in the inner sunset and we have been there since two thousand ten were a fair trade and locally handmade store, and every year we have...

Owner Briana, through URBAN BAZAAR®, hopes to share with others her passion of giving new life to the old and discarded through the creative reuse of secondhand and recycled materials. Briana graduated from san francisco state university with a b.a. in sculpture and ceramics, and was a licensed San Francisco street artist from 2009 thru 2011.
SEE INSTRUCTOR'S CLASSES

Park and Pond is the source for awesome, creative, useful, and well-designed goods. Merchandise includes jewelry, stationery, gifts, home items, art, and bath and body products. All goods available at Park and Pond are produced within 100 miles of San Francisco!
SEE INSTRUCTOR'S CLASSES