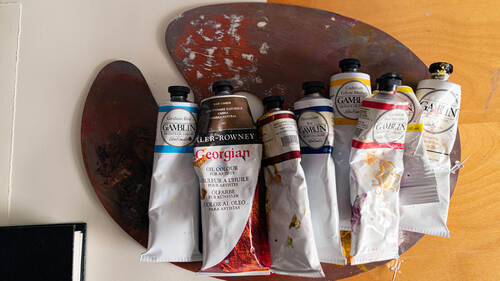 6. Start From a Part

Explore cropping in detail, using old work or a photo, enlarging, and finding a “juicy bit.” This lesson is full of helpful secrets you’ll be itching to try!
Show Transcript

So I spent a lot of time outdoors doing small sketches, traveling around, having a little watercolor, little quashing a set and some paper and I make very, very small color studies, color sketches, something like this. Where you know, this one was done out on location in an industrial area. I really love the sort of mingling of shapes and colors. And then when I come back to the studio I often work with enlarging those images into larger, sometimes even more abstract paintings. So I want to show you that process a little bit as a possibility for you to enlarge and then also possibly choose a section to work from. So this is just a larger, slightly more saturated version of that little watercolor study. And I was looking at this and I was thinking, you know, I like it. It's already somewhat abstract in terms of a landscape, but I was interested in seeing you know what it would be like if I zoomed in even further and maybe started with a part of it as a painting. So I cropped it and I zo...